Early this year, an old D&D buddy of mine (Yes, D&D. Shut up.) contacted me about hiking Mt. Whitney, and asked if I'd like to join. I was excited, and immediately told him yes. Afterward, it dawned on me that it might be a kind of big undertaking, and I realized I was going to have to do a lot of training, ideally with my friend Benji, who agreed to be my buddy-system pairing for the Mt. Whitney hike. This blog post is just gonna be a little about one of those hikes we did as training, with some photos, and a little bit of additional information thrown in for good measure as we go along. 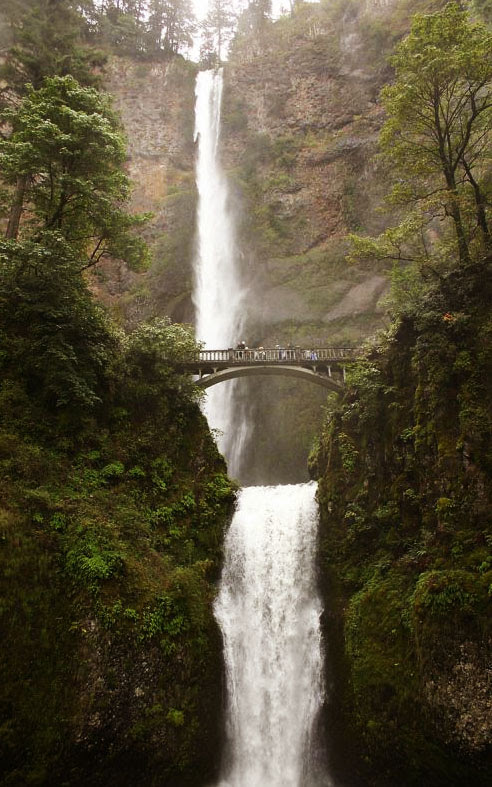 Our first hike was up Larch Mountain. For those of you who don't know, Larch Mountain is just a little ways east of Portland, and the summit can be reached from a trail that starts at beautiful Multnomah Falls, which really is a tourist destination all its own. It's one of the many waterfalls that cascades down the cliffs of the Columbia Gorge in this region, and is worth visiting in every season. Even if you're not up for the hike up the mountain, even if you're not up for the hike just to see the top of the falls, if you're ever gonna visit Portland, you should go see Multnomah Falls, check out the interpretive center and learn a little about the history of the region, have some ice cream and coffee, maybe even enjoy the restaurant. In any case, the hike up the mountain begins with a hike up those cliffs.

At the top you can see a great view of quite a few peaks in the region (Rainier, Adams, St Helens, Hood and Jefferson). Interestingly, there are no larch trees on Larch Mountain. It just got that name because the old-time loggers who were the first Europeans to climb it confused the noble-fir for larch, which only grows east of the Cascades. There's still a lot of beautiful old-growth forest up there, which is surprising for a place so close to Portland and its logging history. Larch Mountain also adjoins the Bull Run watershed, which supplies Portland's drinking water, and after years of fighting, Oregon Wild and other groups managed in 2009 to achieve protections for the Larch Mountain area as part of the Lewis and Clark Mount Hood Wilderness. A lovely set of maps of that achievement can be viewed here.

We did it as an out-and-back trip, though there are options for loops that aren't much longer, and if you just want to see the view from the top, you can simply drive to the upper trailhead, just a short walk from the summit. A couple experienced hikers shouldn't have too much a problem with this hike . . . but we were not experienced hikers. First of all, we were woefully underprovisioned. We went up a mountain with full bellies, tons of water, and a couple oranges. Sweet jeebus, we were loopy on the way down. Our blood sugar was demolished. There are a couple spots where you have to cross picturesque streams using even more picturesque log-bridges with a handrail on only one side, and on the trip down the mountain we were starting to get dizzy, so those bridges were mighty menacing. Second, we probably shouldn't have tried to do this monster hike as our first trip out. It's about 14 miles on your feet, and takes most of a day to complete. Our joints were really achy the next day.

However, we DID get some beautiful pictures.