Just so you know, as happens occasionally, there will be some vulgarity in this post. My kids are not allowed to say certain words even when they feel very strongly about something, but that's more about making sure they are able to communicate with their teachers respectfully at all times and can make themselves understood. But this is my personal blog, and I'm pretty sure I can make myself well enough understood, even on a rambling, not-quite-stream-of-consciousness rant that took weeks to finish like this one.

You've probably already heard a little about some of this. The bit about Trump demanding the names of individuals who worked on global warming, at the same time the GOP is shredding protections for civil servants, that was just a warm up. And the whole Alternative Facts nonsense claiming Trump's belief is better evidence than our own eyes. There were those awful hearings where one unqualified crony billionaire after another danced away from legitimate questions by one side and had their asses kissed by the other on their way to take the job leading agencies they've denigrated and fought for decades. But then that walking ego with a comb-over started spreading his stink over whole agencies.


He basically shut down the EPA for a hot minute there. He's censoring fact because it contradicts the narrative that makes him and his cabinet of billionaires more money. He's demanding that everything the EPA publishes be reviewed by his political hacks for conformance with his delusions and there's a hold on any new publications. He personally called the head of the National Parks Service to bitch about the photos tweeted by one National Parks account that showed his crowd size smaller than Obama's. Does that not strike you as a little bit crazy?

(Side note, Snoop is adorable on tonight's Roast Battle. Yes, I know the show is problematic AF, but it's a ridiculous guilty pleasure that hearkens to the also problematic humor of my adolescence, and I need my giggles these days. I'm watching Snoop get high and hit on a contestant's mother, and in my imagination he's mere hours from another taping of that show he shares with a convicted felon. Trevor Noah is up next.)

It looks like the gag order is illegal, which is good to know, but everyone who wants to keep their job is still forced to largely comply, because the only body of government with the power to rein him in absent a lawsuit is too busy passing their own agenda and covering his ass. Fortunately, he seems to have also inspired some delightful online guerilla activism, and that's what got me writing. 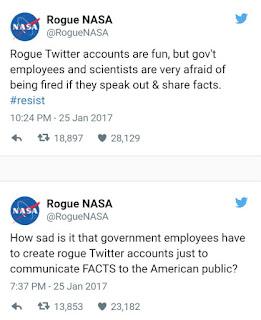 People are standing up. The Women's March was an amazing experience to share with my daughter. I was really pleased to see that the web address www.alternativefacts.com had been bought and made to redirect to a page on the abuser's tactic of gaslighting. I was even more pleased to see all the rogue agencies twitter accounts. Since it looks like objective reality is the enemy of Lord Dampnut (an anagram of his name!), asserting the evidence of our eyes, of verifiable reality, is now a form of protest.

I was relieved to see that people are working like crazy to archive data from the official NASA website so it doesn't get taken down because it confirms science on climate change. They're doing the same for the EPA data. I even found science activists working on how to train statisticians and scientists on the math, geometry, and geography of illegal gerrymandering so they can serve as expert witnesses in legal battles hoping to strike down oppressive and unfair redistricting. 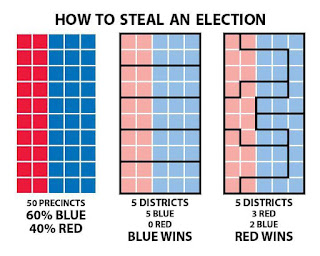 But what really got me jazzed was the March for Science. I've done a lot of reading on it. There've been articles about how if you do a March for Science, you might make science a partisan issue instead of an apolitical one, articles noting that for a very long time scientists have preferred their own sandbox because if you just provide objective data it can't be politicized. But I'm pretty sold on the idea that it has been politicized, and that Trump is demonizing anything and everything that contradicts his agenda. I'm pretty convinced global warming is a global threat that will turn the world upside down in my lifetime by threatening the prosperity and health and safety and food security of literal billions of people. I'm pretty convinced that sitting back and waiting for reason to prevail doesn't work if you've got shitty messaging that doesn't present your case. If hundreds of scientists pull together to amass a ton of evidence nobody will read, and FOX news reports on it from the perspective of denialism and invites on maybe one proponent to discuss it who is facing a panel of skeptical pundits and whatever oil company shill with a science degree they've managed to dig up, we're fucked.

Our understanding of the measurable evidence from almost every branch of science you can name is fairly conclusive, and not hard to explain. 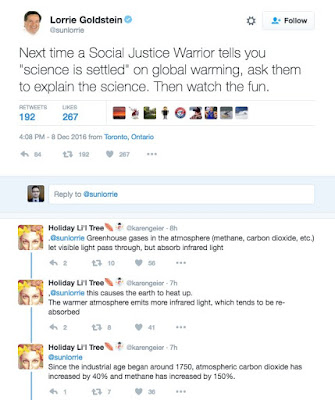 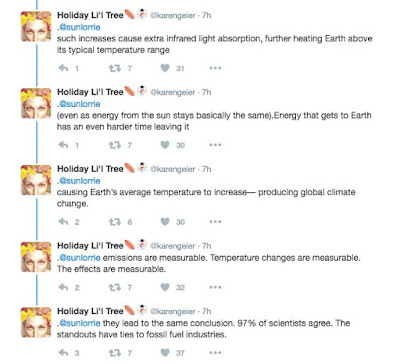 The basic understanding laid out in that chain of tweets (not sure the images will post correctly/legibly, but giving it a shot anyway) is something I've been able to wrap my head around since high school, but it isn't something you EVER see explained on the news or in the paper, and I'll be the first to admit I've done a poor job communicating it, myself. So I'm trying to recalibrate how I go about it.

You've got to keep it simple, and you've got to allow outrage into your voice, or nobody will hear you over the smug white smiles of people paid to look pretty and obfuscate. So here it is. I'm angry. I'm really goddamn angry that we, humanity collectively, are getting screwed over for generations for the financial benefit of Saudi princes and oil barons and Lord fucking Dampnut and his cabinet. Climate change and humanity's role in it is pretty much undeniable at this point, and we need to do something about it now. Fight me.

I've reached out to the organizers of the March for Science asking for how I can help, and I hope some of you do, too. Understand that this March for Science is not really about science. It isn't about funding for science grants or agencies, it isn't about little policy tweaks or the cost of college or peer reviewed journals. It isn't about the scientists. It's about the public. It's about living in a world where asserting anything about objective reality that we can all see with our own eyes is civil disobedience. The Emperor has no clothes, and Congress has literally banned research on gun violence. When everything in our lives from healthcare to safety from police abuses to privacy to the future of all our children is so threatened, we have to stand up.